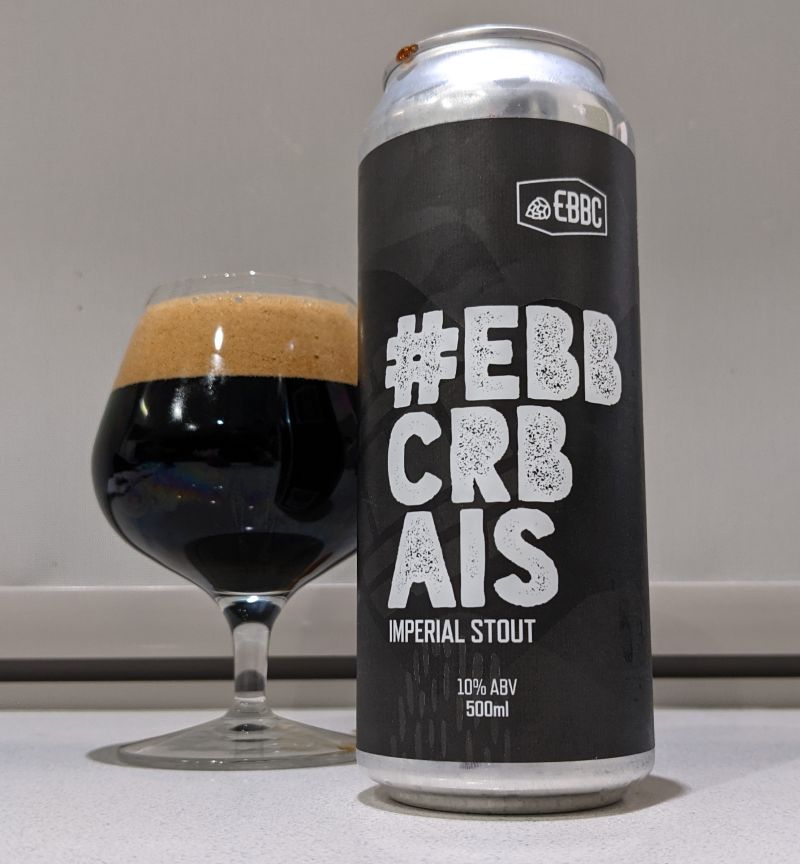 East Bendigo Brewing Company (EBBC) is continuing their foray into limited release, big can beers. #EBBCRBAIS is a bold Imperial Stout aged in rum barrels. What are the origins of the style and how does EBBC’s example stack up?

The roots of porters and stouts can be traced back to 18th century England. Both are known for their dark colour, which they typically get from the roasted and dark malts used in the brewing process.

Over time many different sub-styles have emerged. Robust Porter, Session Stout and Baltic Porter, are just a few examples, but there’s some confusion about just what classifies a beer as one or the other.

The Beer Judge Certification Program (BJCP) is recognised worldwide as an authority on beer styles. It provides guidance on what constitutes the various sub-styles of porters and stouts, but there are many modern-day examples that conform somewhat loosely to the parameters, if at all.

More and more, beer names are being chosen for marketing reasons and have blurred the lines between traditional definitions. The commonly asked question, “what’s the difference between a porter and a stout,” has no simple answer in relation to contemporary craft beer.

Despite confusion at the lower end, there’s little argument that the boldest and strongest of all dark beers is the imperial stout, sometimes known as Russian Imperial Stout (RIS). Known for rich, complex flavours and silky mouthfeel, these full-bodied beers are highly sought after and almost always limited or seasonal releases.

A method sometimes used in the production of imperial stouts is barrel-aging. Lambic beer has been aged in barrels as far back as the 13th century, but for Imperial Stouts, the practice is a recent innovation by comparison. The technique was popularised by US brewery Goose Island in the mid-1990s. Their annual, highly anticipated, Bourbon County RIS was one of the first bourbon barrel-aged beers.

Barrel aging imparts flavours present in the barrel staves into the beer. Whiskey and rum barrels are commonly used, but there are also examples of shiraz and even port barrels.

In 2011 Melbourne brewery Moon Dog released the barrel-aged stout, Black Lung, and in each year that followed they’ve experimented with barrels from a variety of different sources. Some Australian breweries have even formed partnerships with well-known distilleries, such as Wolf of the WIllows and Lark Distillery, and Boatrocker Brewery and Starward Whiskey.

The packaging can range from modest 330ml bottles to 440ml and 500ml cans, all the way up to grandiose 750ml champagne-style bottles. Marketing is a factor, but there’s also a functional aspect. Flavours become more apparent at warmer temperatures. A larger format allows for the drinker to experience the change.

Imperial stouts are generally upwards of 8% ABV. When coupled with high-quality ingredients and time-intensive methods commonly used to produce them, prices can be anywhere from an affordable 10, to an eye-watering 30 dollars or more for a single unit depending on the size.

East Bendigo Brewing Company’s imperial stout is the first of its kind under the brand, but not the first to come out of the East Bendigo brewery. As Brookes Beer, owner and brewer Doug Brooke experimented with barrel-aged stouts as far back as 2015.

#EBBCRBAIS is brewed predominantly with malt from Coopers, but also brown and chocolate malt, as well as roasted barley. It uses Hallertau hops, but according to EBBC, they’re more for balance than bitterness. The barrels used to age the beer are from Beenleigh Rum Distillery in Queensland and were originally whiskey barrels from the US.

Like the entire EBBC range, the 330ml bottles have been ditched in favour of aluminium cans. Following the convention set by the brewery’s first limited release, #EBBCDDHIPA, it comes in a 500ml can, rather than the 375ml used in their core range. Label design is by local Bendigo operation Studio Ink.

The beer pours jet black with an attractive tan head that dissipates quickly. Aromatics are bold and set the scene for what’s to come. Make no mistake, this is a rich, full-bodied beer, with roasted, even burnt flavours and a hint of vanilla. The warmth from the alcohol circles the tongue, but isn’t obnoxious or ‘boozy’.

It’s not an unreasonable price point either. Anything over 10 dollars is certainly high for your average beer. But for a 500ml barrel-aged Imperial Stout, #EBBCRBIS is still at the mid-to-lower end.

If you’re starting out on your craft beer journey, but a bit budget conscious (hmmm, I remember those days), #EBBCRBAIS is a great way to dip your toe in the world of Imperial Stouts. It’s a competent example of the style that will allow you to experience its complexities. Even for the seasoned beer enthusiast, it’s relatively good value for money.

I don’t think the packaging is an oversight by EBBC. It’s not out of step with the industry approach to the style and there are multiple valid reasons for a high volume unit.

As illustrated in my recent write up for Shedshaker’s Belgian Tripel, if you’re curious to sample a variety of beer styles you don’t have to look far. Bendigo is fortunate to have a growing number of breweries in the surrounding region, many of which are producing styles not frequently seen in the wider craft beer market. If you’re like me and want to expand your palate and still support local, you’re well catered for.