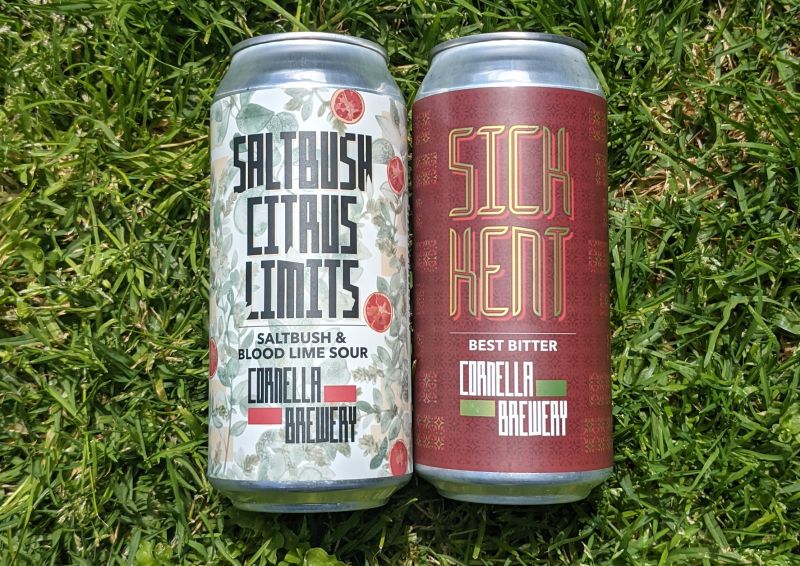 Two new beers have recently come out of Cornella Brewery. A refreshing sour and an English style bitter. The beers are a departure from IPAs and ‘Hazies’, but the brewery isn’t deviating from their paddock-to-plate ethos. Originally scheduled for release at Bendigo On The Hop, they would have been never before seen styles, with a potentially divisive reception.

Saltbush Citrus Limits and Sick Kent were always on Cornella’s brewing schedule, but once their application to participate in Bendigo On The Hop 2021 was accepted, the team decided to make ‘festival beers’ of their sour ale and English style Bitter.

From ingredients to artwork, the brewery sources things locally where possible. Most of their beers are brewed with Estate-grown barley, but for beers in their limited release series, they’re not scared to experiment with ingredients not commonly used in beer, if at all.

Old Man Saltbush is a fast-growing shrub sometimes regarded as viable ‘bush tucker. The crew have foraged locally for the Saltbush in the sour ale. The blood lime is from Gondwana in NSW and the can artwork is by Meander Designs.

The single-hopped Bitter ale uses whole-leaf East Kent Golding (EKG) hops from long-time collaborators with the brewery, Skull Gully Hops, which is only 20 minutes down the road. Alas, the print on the can for this beer says 2021 was the “last hoorah” for the hop grower.

There’s a slight mistiness to the straw coloured beer, but it’s by no means hazy or opaque. Like most sours, the head dissipates quickly.

The impact of the Old Man Saltbush is, as expected, salty, and it works well alongside the acidic Blood Lime. The two occupy different places on the palate and the flavours don’t vie for position.

It doesn’t have the tartness one might get from a typical sour, but the saltiness and citric acidity come together to make it a fascinating beer with a unique flavour.

Like most sours, it’d be refreshing on a hot summer’s day. I only wish I had the discipline to keep one that long.

Cornella Brewery’s take on an English style Best Bitter is the latest in their Outlier Series.

I don’t know if many would expect a traditional English bitter to showcase hops, but they’re the hero of this beer. EKG is regarded by many as the ultimate English hop and has been around since the 1800s. It’s prized for its aroma and was used extensively in early IPAs.

From the initial pour, the beer immediately demands attention with its crystal clear, orange toffee colour. It’s not high on bitterness like a single-hop IPA, but it makes good use of the characters of EKG. It’s wonderfully aromatic, with earthy, spicy flavours and a hint of sweetness.

I’m disappointed these beers never made it to Bendigo On The Hop. Both are a departure from styles typically seen at the festival. It’s difficult to know how they would have been received, but either way, the feedback from festival-goers would have been interesting.

I think the bitter would have been received well, but sours are notoriously divisive even amongst seasoned craft beer drinkers. Saltbush Citrus Limits is not subtle and could be confronting for some.

When I spoke to the team at Cornella, they said they deliberately chose the sour for Bendigo On The Hop because of the diversity of attendees. Sour beers tend to be well received by women, who also tend to have a more open mind when it comes to different flavours in beer generally.

Cornella Brewery continues to earn my respect and admiration. Experimentation and innovation, in the face of market trends and consumer demand, is in the true spirit of craft brewing. It’s brewers with this attitude that have shaped the diverse range of beers currently available.