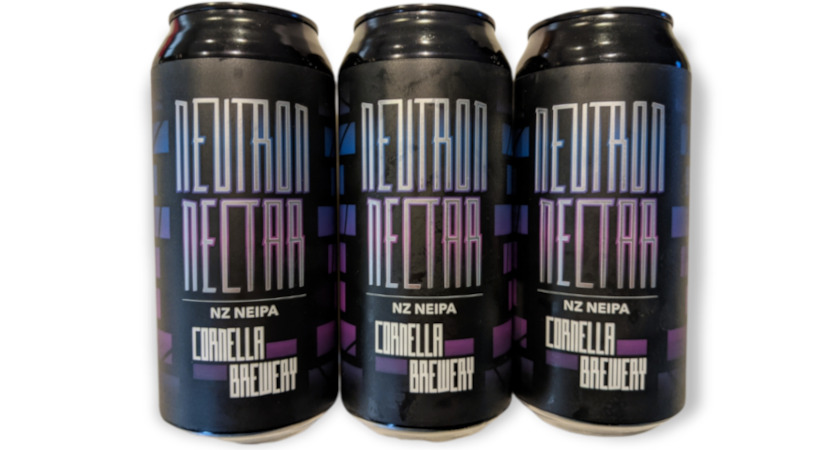 Things are moving ahead in leaps and bounds out at Cornella Brewery. The modest cellar door I first visited some years ago, where I took home more wine than beer, is no longer a quick stop on the Heathcote winery circuit.

Late last year Cornella released the hazy pale ale, Electro Nectar. The sessionable beer was so popular it warranted a second batch. Cans can still be found at Hop Supply Co and possibly even Flight Bar and Hustler. It may even be on tap at the brewery.

Neutron Nectar dispenses with the meek approachability of its predecessor. It’s a full-blown, seven per cent, New England IPA (NEIPA) which also features Nectaron hops. But instead of single-hop, Cornella has brought in veteran Kiwi variety, Nelson Sauvin.

The grain bill contains malt, wheat and oats, which is par for the course with this style of beer. The yeast comes from Bluestone Yeast in Melbourne.

Let’s not avoid the elephant in the room. As I wrote in my piece for Electro Nectar, purists maintain that an authentic NEIPA should be opaque. My first Neutron Nectar displayed little to no haze at all.

For my second, I agitated the can. Resulting in a beer that appeared much closer to what’s expected. It’s not as viscous as other NEIPAs, but I think it still deserves the moniker.

The beer has a delightfully prickly mouthfeel, which might also be considered ‘juicy’. I suspect it’s something imparted by the citrusy Nectaron.

Nelson Savin is possibly my favourite of all the NZ hops. So I was excited to see the team at Cornella using it in this brew. It’s definitely playing second fiddle to Nectaron here, which disappointed me a little, but I’m not complaining about the end result.

I hear a second batch is on the way, which tweaks the Nelson for a little more impact.

Criteria for beer styles like this are somewhat arbitrary. If you’re the type that’s so fixated on guidelines that it impacts your enjoyment of what’s otherwise a well-made beer, good luck to you.

So let’s not quibble about haze or yeast strains. To the average person, an enjoyable beer is what’s most important.

Neutron Nectar is indeed an enjoyable, aromatic, citrus flavoured IPA. It’s well balanced and is a testament to the improvement and growth happening at Cornella Brewery.

It’s even won over some of the more hard-nosed beer aficionados I know, who confess this is definitely a beer that made them want to go back for another.

See you at Bendigo On The Hop

Cornella Brewery will be at Bendigo On The Hop this weekend. Teaming up with local independent bottle shop Hop Supply Co and young Halls Gap brewery, Paper, Scissors, Rock.

The brewery’s festival beer is a blood plum sour called Shepp Art On Plums (which I was lucky enough to sample straight from the fermenter), but I’ve heard Neutron Nectar may also be available for purchase. If you’re heading along, make sure you ask.