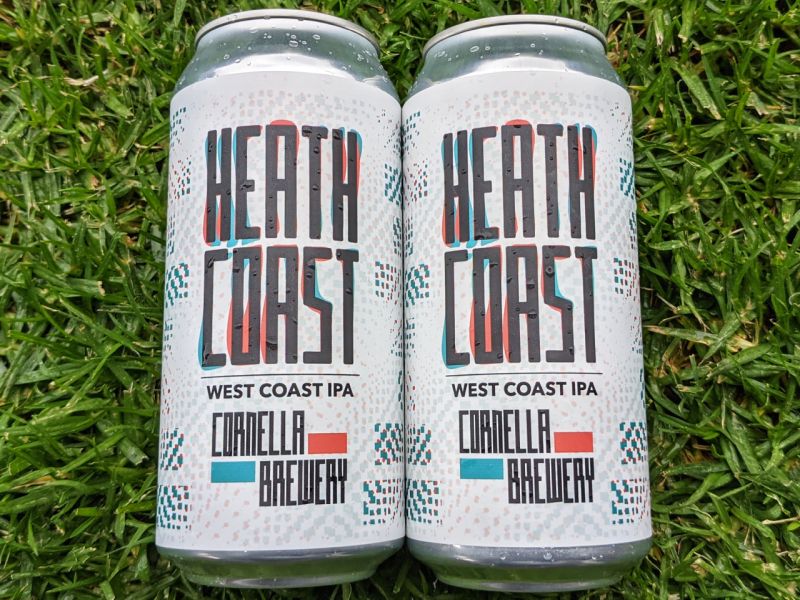 At a time when it seems DDH Oat Cream and Hazy IPAs are everywhere, a familiar friend has re-entered the fray. Examples of the West Coast IPA (WCIPA) are popping up again, including one from nearby Cornella Brewery.

This sub-style of IPA gets its name from the area of the US where it was popularised. During the mid-90s through to the mid-2000s, breweries like Ballast Point, Russian River, Lagunitas and Stone, were some of the first to produce well-known examples.

Inspired by the US, many Australian breweries have produced a WCIPA, but most are seasonal or limited releases. Perhaps the most well known Australian examples of the style are Hawkers West Coast IPA and Fixation IPA. Both have won awards and exemplify the style well.

West Coast IPAs are hop-forward beers with high bitterness. The citrus and piney characteristics they’re known for are achieved using flavourful, aromatic US hops like Citra, Amarillo and Simcoe. The beer’s appearance is traditionally pale and clear and ABV is generally between 6% and 8%.

It was possibly the most popular style of IPA until the mid-2010s when it began to take a back seat to the New England IPA and its many Hazy derivatives. The aforementioned examples from Hawkers and Fixation have endured, but the number of limited release WCIPAs from breweries subsided.

Fast forward to today though, if the shelves at Hop Supply Co, Flight Bar and Hustler are anything to go by, there seems to be a bit of a resurgence of WCIPAs. Some have even been expecting it. More than once, Bendigo Beer’s humble chairman has reminded the rest of us how he predicted their return.

Cornella is a short 15-minute drive north of Heathcote and home to Cornella Brewery. The site for the microbrewery is also home to the Shiraz Republic winery. Naturally then, it’s surrounded by gorgeous, grapevine blanketed vistas.

If you’re travelling there from Bendigo and through Toolleen, just before reaching the brewery is a downhill run with a magnificent view of the landscape where the brewery’s nestled. It impresses me every time I go.

The winery-brewery combo is a beautiful place to visit. Much of the seating is outdoors and there’s live music most weekends. The brewery serves pizzas at the bar, but they’ve also worked with caterers like Smokestack Lightning and Simply Spanish for larger events.

It’s the kind of place where you can settle in for a few beers on a Sunday afternoon, have a beer or a wine, a pizza or a ‘bok-bok’, take in some live music and let time slip away.

In 2018 the team at Cornella Brewery brewed their first WCIPA. I confess that it went completely under my radar at the time. Thankfully, they’ve taken another run at it in 2021 as part of a string of limited release beers they’ve dubbed, The Outlier Series.

Lovingly named Heath Coast, a reference to the beautiful Heathcote region where the brewery’s located, the Cornella Brewery WCIPA is brewed with Centennial, Cascade, Simcoe, Citra and Amarillo.

I visited the team on a recent brew day to find out more about Heath Coast. They told me that after three Hazy IPA style beers (Chas Cole collab, Hop Supply Co collab and another iteration of their Annie NIEPA), they wanted to revisit the WCIPA.

Another driver for revisiting the style was further upgrades to their brewhouse. In 2020 they increased their capacity with larger fermenters. A move that’s also helped them to further improve the quality of their beer.

I’ve got a soft spot for the WCIPA style and I’m encouraged by this beer. I compared it to the aforementioned Fixation and Hawkers examples and it performs admirably. I’d happily choose a Heath Coast without feeling like my affinity for buying locally made indie beer was doing me a disservice.

I’ve also spoken with others in Bendigo’s beer scene and the consensus is that Heath Coast is a great beer and a good example of the WCIPA style. Some have said it’s Cornella Brewery’s best beer yet.

It would be optimistic to expect Cornella Brewery to make this a core range beer, but at the least, I’d love to see it as an annual release.

The WCIPA style benefits from such a release schedule anyway. Hop forward beers are best enjoyed fresh. If limited availability leads to higher demand and reduced time on the shelves, it’s a good thing.

The guys at Cornella have even more upgrades planned for their modest brewhouse. In their quest to not only streamline their processes, but push the quality of the beer higher still, I’m quietly confident that we’ll see them brew another West Coast IPA sometime in the future. I look forward to it.

Win a four-pack of Heath Coast!

Cornella Brewery is generously offering a four-pack of Heath Coast and possibly some other goodies for one lucky reader.