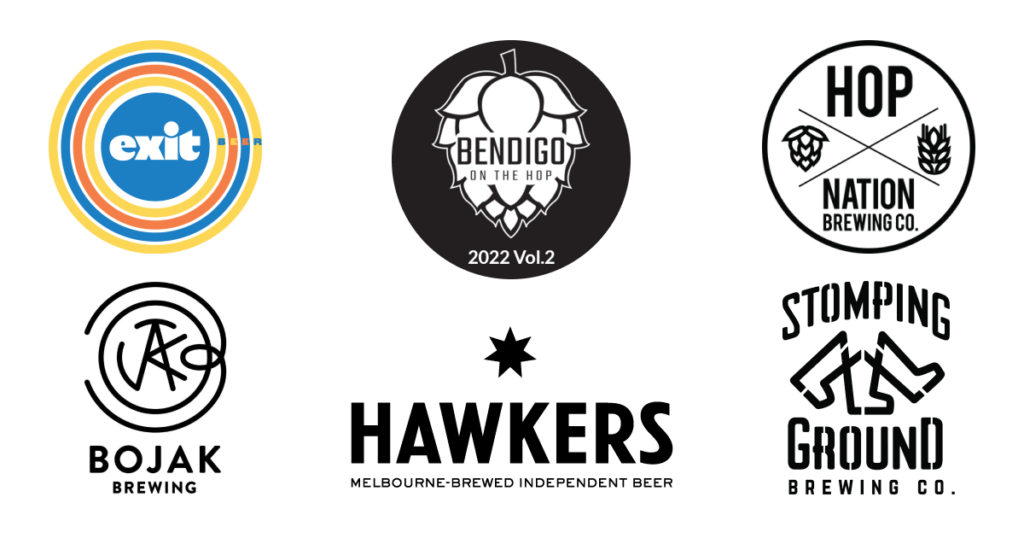 Melbourne has been at the epicentre of craft beer in Australia for almost a decade. It’s a status hotly contested by other regions now, but no one can deny the influence of Melbourne-based breweries like those below.

Hop Nation Brewing Co was founded by two former winemakers working in New Zealand. In 2015 they opened the first brewery in Footscray. The demand for their beers was so strong, that in 2020 they acquired the former Mornington Peninsula Brewery.

As the name suggests, Hop Nation is known for making hop-forward beer styles. But their growth has pushed them outside their moniker, making other styles such as Imperial Stouts and even spontaneous ferment style ales.

Hop Nation came to Bendigo On The Hop for the first time in 2019 and returned in March 2022. We’re delighted to have them back again. You’ll find the at The Rifle Brigade.

The story of Stomping Ground (SG) brewery has many facets. From its connections to The Taphouse in StKilda, GABS Beer Festival and Hottest 100 Craft Beer Poll, venues at Tullamarine Airport and Moorabbin, right up to the brewery’s very recent sale to Good Drinks Australia.

The first SG venue was opened in 2016. Located in Collingwood, the spacious, family-friendly beer features great food alongside a multitude of beer styles. It’s a must-visit for any craft beer enthusiast visiting Melbourne and a stone’s throw from other great breweries, such as Molly Rose, Fixation and Burnely Brewing.

Reports from the host venue, Hustler, indicate SG has put a great deal of effort into their unique festival beer and is keen to make an impression. We have no doubt that they will.

Hawkers’ base of operations is in Reservoir in Melbourne’s northern suburbs. The facility is primarily geared towards production, but a small taproom has been added in recent years.

The brewery is fiercely independent. The roster of beers features some outstanding limited releases as well as a consistent core range. Widely known for consistent, high-quality beer, Hawkers have been received countless awards locally and many worldwide.

Hawkers have participated in Bendigo On The Hop multiple times over the festival’s run. We like to keep variety in the brewery lineup, but it’s fair to say Hawkers are missed when they’re absent. They’ll be at Handle Bar.

Exit Brewing began the journey back in 2014. Initially brewing at Cavalier in Melbourne’s west, they eventually teamed up with Kaiju and shared a brewery in Melbourne’s South East. Sadly, Exit’s venue, Uitgang Bar, closed in 2022, but the brewery is still strong and producing beer for the retail market.

The first of Exit Brewing’s beers was a Saison. Certainly an audacious move in today’s landscape of IPAs and Pale’s, it was something of risk back then too. The founders were inspired by beers they drank while working all over the world. The lineup features New World styles from the US, as well as traditional European styles.

Like Hawkers, Exit has appeared on and off at Bendigo On The Hop in years past. We’re always glad to see them. Exit Brewing is hosted by Babylon Bar.

Bojack is the youngest brewery in this cohort. The brewery, complete with a family-friendly bar and restaurant, opened in 2018. The family-owned brewery’s focus is its local community, regarding the clientele from the surrounding area as ‘extended family’.

Their goal is to make beer anyone can enjoy. They brew approachable lagers and pale ales, but for the more seasoned aficionado, complex farmhouse ales, hoppy IPAs and rich stouts.

Bojak’s commitment to the community is reminiscent of that of many of the original supporters of Bendigo On The Hop. Bendigo Beer is always willing to assist brewers that uphold the family-owned ethos that so many independent breweries have championed.