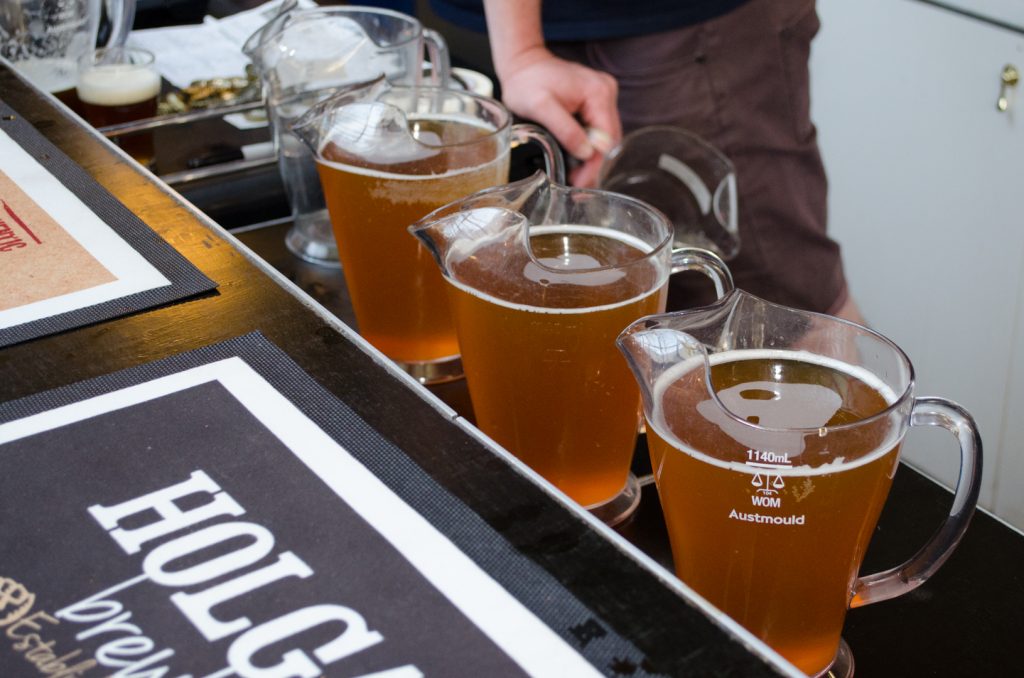 Check out the full list of venues, breweries and beers. A fantastic lineup for Bendigo On The Hop 2022 Vol.2

The legends at Hop Nation are back at it again, playing to one of their many strong suits with this hazy IPA which features Nectaron, Vic Secret and Citra cryo hops!

It’s Just Another IPA. Tasting like scooting through a bed of tulips, sucking on a ripe paw paw humming welcome to the hop jungle. Featuring Idaho 7, HBC 586, Talus and HBC 630

Cold IPA? IPL? West Coast Lager? The differences can be subtle and the borders can be blurred, but we’re sure we’ve hit the mark with this hop forward and crispy beer. A restrained but delectable malt base gives way to a bitter, fruity and balanced smack of delicious Simcoe and Mosaic hops. An addition of Munich malt keeps the body interesting, but the use of lager yeast keeps it super clean and lets the hops shine.

Backing up the American lager that they brought to BOTH22 V.1, Love Shack have returned for BOTH22 V.2 and they’re bringing their own ‘speedy’ take on a Euro style beer.
Italian pilsners set themselves apart from their older Czech counterparts through dry hopping of ‘noble’ hops. Don’t expect the strong fruit-driven hop flavours of modern IPAs here, instead you’ll be greeted with some lovely floral and herbal notes accompanying the usual crisp pilsner character.

A tradition started in Ireland, swinging past Italy and straight to your glass. We brewed our Italian-style Dark Nitro Pilsner to float a-top of Love Shack’s Italian Pilsner in a marriage of love of the old countries and each other! Our Dark Pils is a velvety but crisp drop with boat-loads of German hops and Heritage.

An English-style Strong Dark Ale, with the addition of Lark Distillery Rum

This trans-Tasman collaboration between NZ’s Queenstown-based Altitude Brewing and Hawkers Beer is a ‘high density hop charge’ IPA that embodies the future of super-hopped beers. Citra and Mosaic feature through high-tech HPA hop lines Incognito®, Lupomax®, and Spectrum along with T90 for a four-dimensional approach that facilitates an aggressive hop regime without the burn, astringency, and vegetal characters that can appear with traditional hopping methods.

The Cambrian (The Hub)

Named in honour of the beloved budgie of Digger, a long time Cambrian Hotel regular, Dave is a vibrant purple sour ale that brings the nostalgic flavours of your favourite grape-flavoured childhood candies to you in the form of a tart, refreshing sour ale. Expect big aromas of sweet berries and vanilla, with a smooth body and delicate sweetness courtesy of lactose, perfectly balanced by clean acidity on the finish.

Our extra stout, all toasted and malty, has been fortified with Grounded Pleasures’ Straight Up Cocoa, locally sourced Tower Hill cherries and toasted coconut. This beer is ripe for the picking!

Using pale, Munich and biscuit malt to create a deep golden hue, we added coffee beans and cacao nibs to conjure up the illusion of a much darker beer. Toasted coconut adds another layer of flavour while lactose provides just enough sweetness to smooth out the finish.

The Stout Master has done it again! It is no secret that Grum loves his stouts and that he is pretty darn good at brewing them too (*ahem* MIBC Stout Brewery of the Year, AIBA Trophy for Best Stout, multiple gold medals…). For this year’s winter limited release, he drew inspiration from his early days of homebrewing whilst living in Ireland, where he played around with lots of peated and smoked malts. He also got a not so gentle nudge from Loz, our sales maestro to brew something (for her) without lactose.

A complex nose delights with generous aromas of cacao, licorice, smoked bacon and subtle hoppy notes. On the palate, lashings of bittersweet chocolate are complemented by hints of dried fruits, warming spices and dark roasted coffee.

We have supercharged our ever-popular Celtic Red to create an imperial version weighing in at 7.5% ABV. We’ve thrown in more hops to balance out the extra malt – does this make it an Imperial Red IPA? You be the judge.

The familiar toffee notes are enhanced by additional alcohol, providing a robust background for stonefruit and peach notes from the hops

This year our annual Belgian style is a traditional Golden Strong Ale. It’s an easy to drink yet complex beer – a real “wolf in sheep’s clothing”. All pale pilsner malt provides a soft backbone, allowing the yeast and hops to really shine. The Belgian yeast produces soft, fruity esters reminiscent of oranges, apples and pears, with a light peppery spiciness. Modern Saaz-cultivar hops bring a new-world touch of citrus to complement the traditional floral and spicy profile. Proost!

A keg-only batch, being launched at BOTH!

A crisp, clean example of the style that originated in Pilsen, Czech Republic, in 1842. Made with floor malted barley and lovingly lagered for 12 weeks post-ferment.

After two super limited runs at their venue, Paper Scissors Rock are finally unleashing this double hazy IPA on the rest of the state. BOTH 2022 Vol.2 is your first chance to try this beer outside their brewery in Halls Gap!

It’s the feeling of being watched, seeing a ghostly figure from the corner of your eye. Reaching for a Haunted Muffin Double IPA to settle your nerves…
You’re suddenly overcome by something otherworldly. Floral aromas with passion fruit, lychee, melon and herbal notes, terrifyingly bold hop flavours surround you…Orange, lemon, tropical fruits and spice encompass your very being while a malty sweetness and a firm bitterness bring the evening back into balance.

The father of smooth stouts. An American style stout with flavour notes of roasted malt, sweet caramel, and dark fruit, this black number is a taste sensation to behold. The force is with us all on this one!

German malt which make for a rich, roasty and smooth brew.

We invite you to don your most plush robe and join us in tranquillity as we enjoy some well-earned Me Time in the form of this enlightened New England IPA. Using the hearty combination of El Dorado and Strata hops, this beer showcases the intense flavours and aromas of tropical passionfruit and mango with layers of melon, grapefruit and fresh strawberry on the nose. We’ll leave you to your couch now…

﻿﻿We journey into the upside down with our first Red Rye – and IPA that ﻿exerts earthy (or perhaps unearthly) qualities. You’ll get a hint of spice and a dry finish from the rye malt; while the caramelised malts add a slight sweetness in the middle palate. The inherent complexity of this style is balanced with the panache of an evil Demogorgon, a subtle bitterness and notes of dark fruits and citrus thanks to a face melting solo by Centennial hops.

‘On The Couch’ Imperial stout with coconut and vanilla – 9.1%